It's been two months of working on Beyond You! behind the scenes, with no gameplay updates in that time. There has been general updates in that time, of course, but in terms of tangible gameplay, there isn't much I am able to show. I apologize for the silence in this way, but it's been an executive decision to avoid releasing half-baked content or anything that won't be permanently canon. The impact of the game is also lessened, I feel, by repeatedly playing the introductory section.

First, I'll start off by reminding you there is a Discord, which is free to join and full of more information on the game at large! There's more than a hundred people in there, and I'm pretty active within the group too! I also made a Beyond You! Wiki page. Both of these are an attempt to keep the community active while development continues, as we reach almost four full months of the game being out. It's come a long way in that time, and this is another notch in the history of the project!

Secondly, the KickStarter is slated to happen at the end of July, and a demo will be uploaded that will feature Day Zero to Day Two (so three in-game days). I'm debating the rewards I will include, and am open to suggestions. I'm currently planning enamel pins, prints, stickers -- as for digital rewards, beta access, username integration into the game, thank yous in the credits as well as a discounted fan pack. I believe the amount I'll be requesting should be around $3000 USD for the game to have 20 original CGs and around 20 CGs. Stretch goals will include voice acting, original backgrounds, additional coders and an GUI artist overhaul.

Thirdly, I'll begin by saying that the version currently out on itch.io was around 22,000 words while the current version is 32,000.  I do hope to see that number hit around 60,000 words by the time we hit the KickStarter (which is aiming to be around the end of July). Below I've included a YouTube video which shows a segment of Aiko's route, and her newly implemented sprite as well as some of the music changes. I've also changed how the textbox works, in the sense that it no longer has weird flecks in the longer sentences.

Also, I fixed the way the girls change expressions, so it no longer affects the WHOLE screen. It makes the overall experience just feel so much more streamline, which is quite satisfying on my part. Chatroom conversations have been extended, and stand-in CGs were added to show their placement.

I also have a bunch of stuff to say about the game overall, so this is a good thing to watch if you're curious. Also consider subscribing, it helps me out and I share tutorials for making comics, art and games!

Each girl now has a theme song, and below is Haruka's. These theme songs will vary through gameplay, depending on the scene. There's slated to be around twenty tracks total at the moment, though that number may go up or down. I'll be sharing each girl's song in such a fashion. I do hope you enjoy!

For sake of showing the general direction of the game's art style, and the girls have been somewhat updated -- Aiko is implemented, while Haruka and Yumi . Kana will have her hair color changed to a soft, light brown color as it balances out the color pallet. I felt the teal (while cute!) felt too dark compared to the other girls. Her hair will also be 'smaller', so prepare for her to look quite different! (Also, I added my own expressions to the girls until the final assets are added, so please enjoy ANGRY HARUKA). Blinking will remain an aspect of the game. 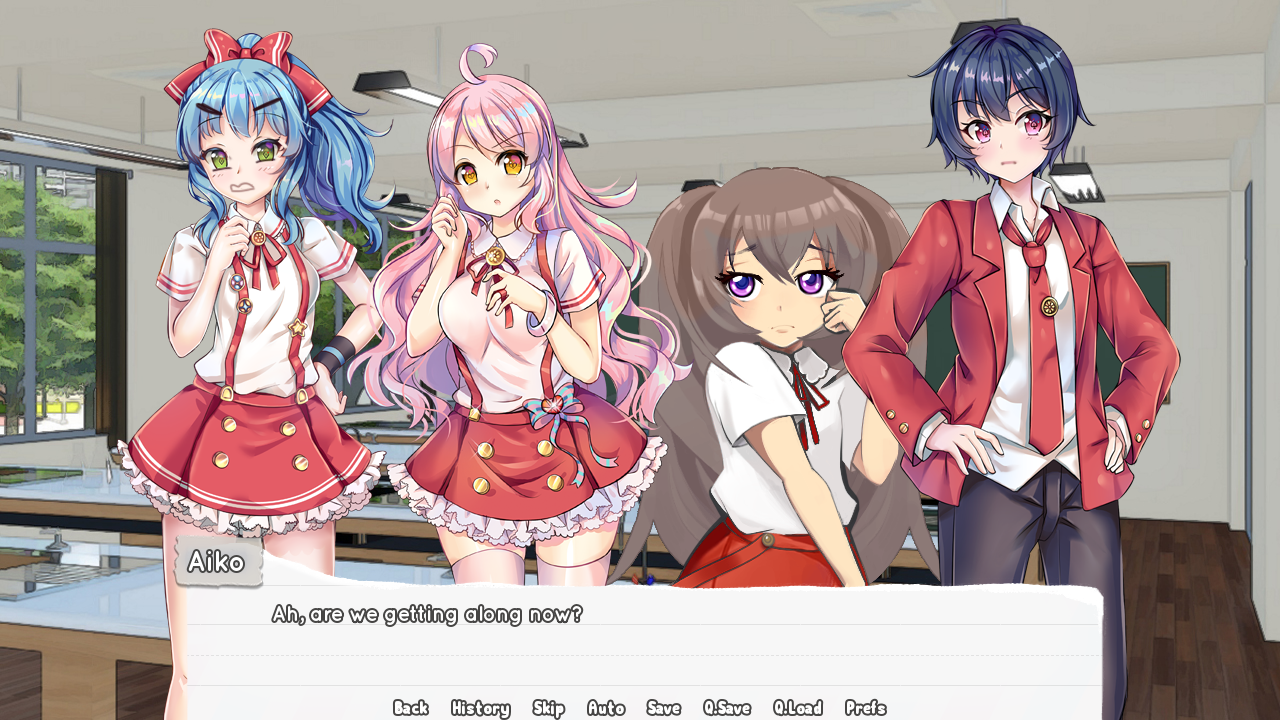 "Take small steps every day and one day you will get there." It's rather heartening to remember that the daily efforts will bring about something great if I just keep trying. I will admit I feel rather strange about the project, like I'm failing at every turn, but I'm doing my best to ignore that feeling.

Thank you for your time, and see you again shortly!

I love the work. And I'm gonna miss Kana's old hair color, but her new hair is growing on me already. 😊

any reason you dont want to update? 🤔 and I'm not sure what an affiliate fandom wiki is -- is it different to the one I made?

firstly, I'm a fan of aikatsu. that's what i move on Miraheze Wiki. so i'm not on fandom wikia anymore.
second, i downloaded the latest version for beyond you. however, i'm stay 1.0.02/1.0.03, just a tech demo.

Actually, my miraheze wiki is Bluestone Aikatsu. so i do not want Plagiarism.