A downloadable game for Windows, macOS, and Linux

[ PSA: Includes pronoun choice and name choices. Please play with caution! It is an experience in itself. Caution if you're easily startled or are sensitive to flashing images. ]

This is a short and sweet experience, as part of a larger project I would love to make! It's your last year of high school, and you're about to make a big decision for your future... Who will you choose to be your lab partner?!

There's Haruka, the fiery runner! Aiko, the intelligent leader! Kana, the silly sweetheart! And Yumi, the mute snarker! And don't forget you! There's no one else beyond you, after all.

Early Access: The game is currently only a demo! Bugs may occur! Please let me know if they happen! We're currently on 1.1.06 (updated as of 24/07/2019) . Future updates will be quality of life, and no major updates have been officially confirmed yet. We're looking into an official artist, background artist and musician for the game, so keep an eye out for a potential KickStarter!

02/08/2019  > 1.1.08: This update is more general quality of life for the project; the art (by Dai_Dai_Iro) is almost finished, and the music (by Jan Hehr) has a solid foundation. I've included one of the projected backgrounds (the library & science classrooms) by @fuyunokawa_art on Twitter! As well as a bedroom background by FoxLeos on deviantART. Day Zero thru part of Day Four are out; there's still more to the story, but it's mostly in the way of art assets and more meat of the story.

There is no CGs implemented at the moment! The majority of this game was developed in five days, for NaNoRenO2019, using free assets.

Me paying respects to Beyond You, the VN that could have been the next big thing in Visual novels D=

What kind of game?

Just coming around to pay my respects to the game

To everyone asking: Yes the game is currently cancelled but can come back if the creator ever wishes so but don't keep your hopes up. The Discord has been deleted and the creator (HexVexed) has turned into other projects of her own.

I am not a creator or dev or the game just a long time fan that wanted to clear the confusion.

God damn it, I was concerned this would happen. Thanks for saying so. HexVexed is actually AIcandii now just so you know. Basicly inside i'm crying D=

Does anyone get the feeling this game will never release?

Hey AICANDII, have any ideas on when the full game will release?

Will this game ever get finished?

And is it canceled?

Okay, so I noticed a few things! Spoilers, of course, so do not continue on if you haven't completed the demo! You have been warned!!

Okay! So! First of all, has anyone noticed that the glitchy figure looks a whole lot like one of the avatars you can choose in the group chat?? And second, I noticed that Aila's name looks almost like Talia, but scrambled and without the T. But if you look at her name when texting her, you're able to spell out Talia with the letters! I'm not sure how many of you readers know about the Talia theory, but here's a very brief explanation. If you go into your files and find the character files, all of them besides Kana's says something like

I've been here since the first released version of the demo, and I have got to say, S O much progress has been made on this!! It looks absolutely amazing! I did see a couple of odd things, of course, but that's to be expected in a demo. For example, when Aiko yells in the classroom, she has a sprite (which I only saw once in my entire time playing) where her eyes are closed, her brows are furrowed and her mouth is opened as if she's shouting. You can still see the bottom lashes of opened eyes positioned under the closed eyes. So, yeah, just some small things, mostly spelling errors. Still amazing, though!! The story has me hooked, and the characters are so unique and hard to choose between. I really appreciate that Kana's Dissociative Identity Disorder seems well researched, something that's hard to find in other stories. Overall, great work!! I wish you luck for the future of this game, and I look forward to further updates!

Oh, and if help is ever needed, I would love for skills of mine to be able to contribute to such an amazing project! I don't expect to be approached and asked if I can help, I'm just saying that if it's ever made public that help is needed (if it has been, I haven't seen it, but I will be looking after this), I'll absolutely and gladly offer my skills!

Absolutely spooked! Amazing game, shocked by the boundries this game pushed going to limits of reading your computer name in a renpy software. Can't wait to see more of this!!

Reply
Beyond You!1 year ago

WHAT I have found really weird at the atriumph.txt it has an secret world that says transfer successful its really weird the question is what is transferring and why? and where I guess this is am mystery unsolved

I'm guessing the project is still on hiatus. I hope you continue, but if you lost interest I understand. It wouldn't hurt for an update on here or at least confirmation of what's been happening though. I've had my eye on it for a long time. I'm still in the amino. However, it doesn't seem like anything is really happening. I saw that you answered a comment 4 months ago, so I'm not giving up on the game just yet. You haven't posted on your youtube and I've been off Twitter so sorry if something was said there. I hope I'm not coming off as rude or anything. It's just that there are still a few of us questioning about the game and if it's canceled or not.

I've been working on the project on the back end for a while. ^^ Updates soon hopefully.

Not canceled! Just working on funding and other projects but AAA will be back soon hopefully.

Thank you for responding!!! That's totally fair. I hope to see your successes in the future! Sorry if I seemed harsh in my initial comment.

I am once again here from your webtoon, but this time to congratulate you on getting featured!!!I'm so happy for u!!! Thank you for all ur creations

umm hey i kinda opended up the wrong thing i think is the broken version where they acuse you of everyhing i dont know yet im  new so..

Hey, does this game have explicit content? I'd like to play it, I just want to make sure there's nothing too graphic (violence is fine)

No, nothing explicit!! ^^ Not even really violence. Flashing images and dark themes, sure, but nothing visual nor discussed in too much detail.

Just finished playing a few days ago. I just wanted to say that this is a fantastic experience, and has the potential to be as good as (if not better than) DDLC. I really hope you continue working on it, as it looks very promising from the demo

plot twist kana didn't do the fire. It was aila.
But I legit love this game meep haruka and mc would do this tho

What happened to the discord???

Im still playing the game as I write and its very good so far!! I just reached the science lecture, and boy, was I taken off guard. Again, great game!

I just want to say
I absolutely adore this game
Everything about it
The art, The characters, The story, The writing, Everything
Ugh yes beautiful.
I've played this game at least twenty times over, just within the week i downloaded it
No! I'm not exaggerating!
You're doing an amazing job! This is honestly one of the best things i have played (and i've played quite a lot of games, especially visual novels). It's great and it's only a demo!
I'm super excited for the full version! I'm certain it'll be fantastic!
Thank you for making such a wonderful game. I hope you're doing well!

(ps: Yumi is my personal favourite so far. I adore her personality so much. it's great! and just. aa i love her character design! I might be a little obsessed... ahah)

I'm going to try This game..

Are you thinking of doing translations in other languages for the game in the future? (P.S .: I am Brazilian and would love it if it had a Portuguese translation PT BR)

anybody decode these to things

the second one is a pgn

Is it not a good ending yet？

It's working now, but I have an idea, you know when you look out the window, I think it should say something like, "It's a beautiful day outside, birds are singing, flowers are blooming, on days like these, kids like me... should be going to school." IDK I thought it would be funny. Great game too!

Yesssssssssssss！...How did you come up with it?  I thought I was thinking of it alone. Haha

My translate have it too.⊙▽⊙

I haven't last checked this game since this summer, and woah. It looks amazing. The character designs stayed the same except for Kana, it seems? Love it!

Hey, Hex. This game being cool doesn't even begin to describe it. So far, it has great artwork, a neat story line, interesting characters and their development and more. If I get the chance to support this game, I definitely will! Thanks for this amazing visual novel!

Thank you very much for your comment!! ^-^ I'm currently seeing how the KickStarter goes, but if that doesn't pan out, I'll be looking at other methods of financing the game.

There's a bug where it wont even let me boot up the game.

C:\Users\Administrator\AppData\Local\Packages\Microsoft.MicrosoftEdge_8wekyb3d8bbwe\TempState\Downloads\BeyondYou-1.1.08-pc(1)\BeyondYou-1.1.08-pc\lib\windows-i686\BeyondYou.exe. Is it missing? I typed everything out to make sure I didn't mess up anything,but can you explain that plz.

I'm not sure. I'd recommend deleting the files and re-downloading and re-extracting them.

Sounds like you are trying to run it from whatever temp directory your internet browser downloaded it to. Maybe try saving specifically to somewhere then run it from there?

"Broken" download is the ORIGINAL demo, made in March 2019 for the game jam in March where you make a game in a month. ^^

When do you think the game will be fully complete? I'm so in love with it!

I Love this game so much! just the demo's ending w/ the Yumi route makes me wonder...does she really dislike the mc or not? In any case the game is brilliant, what will happen if the goal isn't reached?

The game will continue development with a revised campaign in a few months. I'll be paying for it as I was before, slowly but surely. I will probably also add more tiers. It's a difficult balance to strike! I may even just release one linear storyline and kickstarter additional routes. 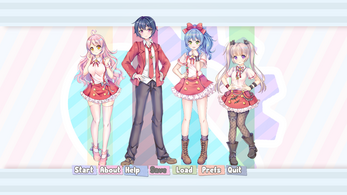 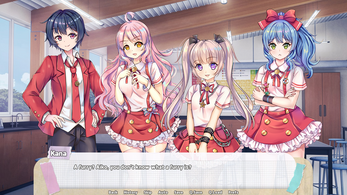 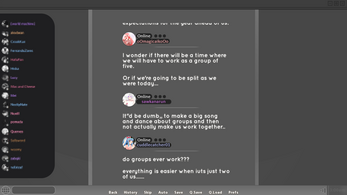 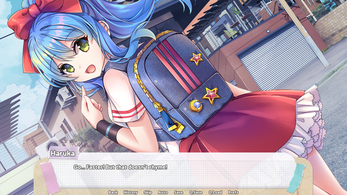 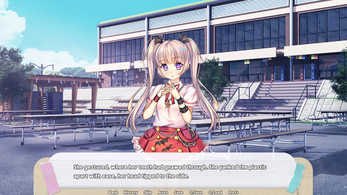 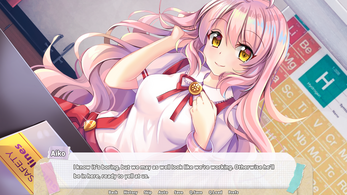 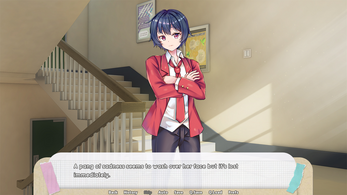