A downloadable game for Windows and macOS

[ Please play with caution! It does touch on mental health, anxiety, eating disorders and other topics of that nature. Caution if you're easily startled or are sensitive to flashing images, simulated panic attacks or warped audio. ]

Paige lived a sheltered life in the spotlight, and came out the other side worse for it all. She can't even sing anymore, something she made millions for only a few years ago. It's a shame all that money remained with the record company, and somehow she still owes them a few million more. While writing lyrics for the new wave of pop stars is okay, Paige can't help but feel like there's more out there for her than lyrics.

Paige Reed Ex-popstar and full time lyricist; Paige has lived in the spotlight from when she was twelve two years ago. Now, she has a hard time outside and she cannot stand the stage. Yet, that's where she finds herself, after months of badgering from...

Anna Raymonds Professional skateboarder and currently a bassist; after a bad fall from their board, Anna ended up with more time on their hands than they know what to do with. They do not understand being told they can't have something or to chill out. This causes a number of issues with their manager. They were the one who took encouraged Paige to escape the stranglehold of her manager, and of...

Murdoc Matthews (WIP) Murdoc acted as security for Paige when she was on tour, and holds himself responsible for what happened to her. Due to a mutual friend with Anna, he's been hooked into a band with her. He's a singer and guitarist, while Anna plays bass. Their friend, Ryan, used to skateboard professionally before he retired to do music. Murdoc? After Paige escaped, he lost his job as tour security and bounces from festival to festival. Sometimes he's a personal bodyguard, but mainly he writes.

As of the 12th of March 2019, I've released a prototype of the game as it currently exists. The main route is Anna, with most assets developed in her path. I became too ambitious and the project grew way bigger than expected... But it's a start!? Anyway! Let me know what you think in the comments below. If any issues stand out to you, or any paths stand out to you that you'd be interested in, I'm happy to take on the feedback!

I just finished it. It's good demo :)

I really like the artstyle.
I'd tell some more about it but I noticed that you arleady know which part needs to get "polished"

Good start for some bigger story.

I like Paige's style and her personality. And Anna is very cool and funny. I like her too. They look very cute together

I'm in love with the  a e s t h e t i c s  !  From the Backgrounds to the UI to the character art i just wish i could wear it somehow.

The Story setup was great.  You have this cast of characters that all have history with each other and you kinda have to piece it all together but it happens organically, no "let's all pause to reminisce" and everything gets foreshadowed at least a bit so you're not out of your depth.

Really like the journal, breezed through it and felt way more attached to the protagonist than at the start.

Overall a standout title and can't wait for further updates

This comment warmed my heart immensely! I love this project to pieces, so I'm glad to hear it was an enjoyable experience. It has a lot to go, and more to be done, but I cannot thank you enough for the kind words! 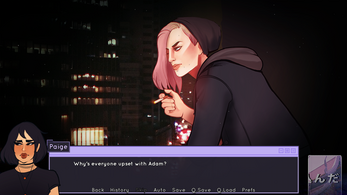 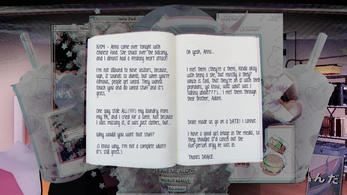 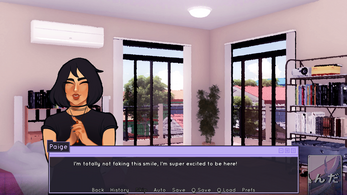 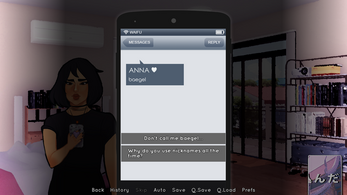 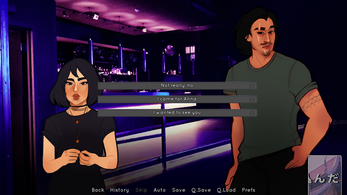 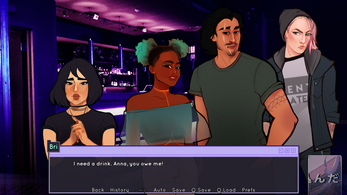