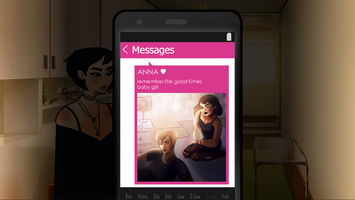 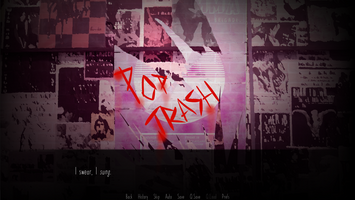 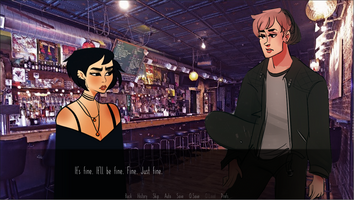 I’ve found a happy medium between writing, video games and comics… :^) I know I’ve posted this before and it is just a style test, but honestly comics involve too much repetitive work that I know I’m not gonna do. I like coding more and being versatile with assets, and I don’t have an issue with drawing new stuff but IDK – visual novels as a medium have just suited me more since I was a wee babe, who played too much Monkey Island and Grim Fandango. Also Phoenix Wright. And maybe some questionable otome games. >_>;;

Ten hours in and it's a wild ride. Say hello to my micro-game jam! It’s currently just a linear path, but I hopefully with have a points system and some inventory things. I definitely wanna implement an image-map so you can examine things. And 100% original assets! For the moment we have Paige and Anna, some stand-in assets & GUI, and their bickering. :33

I acquired some amazing phone/texting code from Nadia Nova which 10000% has met my needs and expectations. I’m still tweaking things, and I KNOW IT’S BETTER TO HAVE IT WORK THAN HAVE IT PRETTY, but mama didn’t raise me right. The majority of assets are either free to use, or ones I’ve paid for. The characters are my own. (And fun fact, Anna is actually based off of Chloe Corella and more recently Chloe Price from Life Is Strange, AND IT’S A TIME.)

The menus are still being tweaked, but this is workable now. The next thing I really want is a dynamic journal & parallax. I got it to work, but it refused to clear a layer on a new scene so the code has been benched for functionality. All backgrounds will be replaced as needed, but I have them as stand-ins for the moment. >>;;

Get Mistakes Were Made