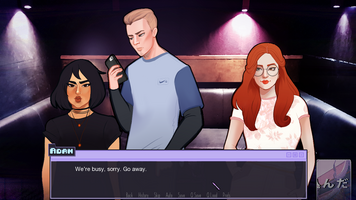 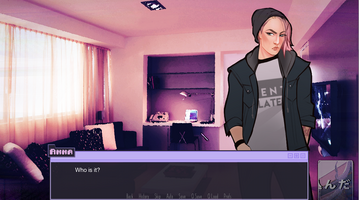 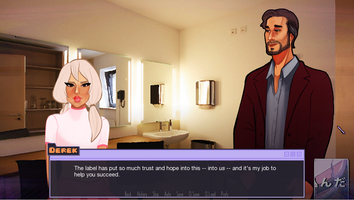 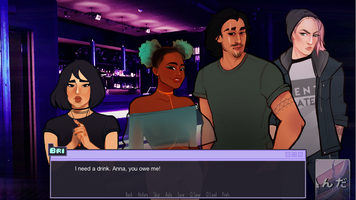 Not a LOT has changed in the past few months, but I’m now playing it thru over and over, to see if I can round out at least a playable demo. I’m pretty close to completing it, and I’ll be limiting the paths somehow so I can make the story easier to write for myself. In future it’d be amazing if I could have all the stories happen at the same time, with the romances splintering off – but the reality is that I cannot fathom how to do justice to ALL the characters involved. Instead I’ll be focusing on Anna and Murdoc as primary love interests.

In future, I’ll plan out the story completely so I’m less led by assets and ‘seat of my pants’ style development, as I’m kinda in a hodge-podge of story ideas with no clear direction. But! The playable demo is still gonna be almost an hour, if you read through it at a moderate pace. That’s not so terrible an outcome. I’ll be trying to round out sprites and finish off the essential assets, but beyond that, I would actually love to move on to a new project. Not to leave behind this, or leave it altogether, but just so I can have a series of shorter, simpler stories that will teach me how to do Mistakes Were Made BETTER.

I would LOVE to have a proper soundtrack for this game too, and maybe even to cast someone to sing some songs for Doll Emma, so that’d be a stretch goal one day to organize. I’d need to find a singer I like though, but these again are the problems I run into. I keep wanting to do more, rather than finish what I have on hand.

In summary, 1) all the older sprites need a glow up and additional states/expressions; 2) story needs to round off in two paths, one good and one neutral for each; 3) need to finish CGs for several important scenes; 4) need to fix the main menu look, as it’s a bit bleh atm. That’s it really! Pretty doable!

Get Mistakes Were Made